In Mr Barker’s class, our students learned all about geography and the vocabulary involved with describing various locations. Later they used this knowledge to write postcards describing their weekend trips.

In Ms Rae’s class our students learned all about describing food! Later they learned about restaurants, ordering food, as well as verbs for cooking.

In the afternoon, our games of football and t-ball were unfortunately interrupted by rain. So instead we enjoyed a round of dodgeball in our sports hall.

The feedback from our students for their last English trivia night in the theatre was so good, that we decided to put it on again. 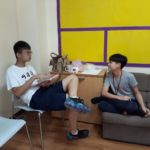