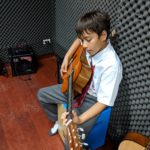 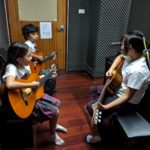 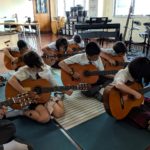 In Music this term, students in Year 5 have been learning about the music of Carole King and her importance as a female composer in the world of popular music. All of the learning has centred around her Grammy Award-winning song, You’ve Got A Friend.

Singing and rhythmic understanding have been a big focus of this topic. Each lesson has started with a ‘follow the leader’ warm-up based on different Carole King songs. As the children listen to the songs, they follow the teacher’s lead with body percussion rhythms, beat boxing and to recreate part of the song as a class.

Following their “Everyone Can Play Guitar” unit in term 1, Year 5 have also continued to develop their performance skills on guitar. As well as adding to their range of chords to learn the song, the children have also learnt how to pick, following a simplified form of tab notation. This has enabled them to practice improvisation, starting with some call and response exercises and building up to individual 1-bar solos in front of the class!

Most recently, this unit has seen Year 5 creating their own compositions in small groups. Taking two of the chords from the song, they then added a strumming pattern to create a repeated chord progression. The children then used the improvisation notes they have learnt to write their own melodies. Each group have worked independently and collaboratively to create their own music and will soon be performing their work for their friends in class!